The Queen of Rage

"Bad boy! Time for a little punishment!"
―Wonder-Pink, in battle

"Do not tell me that is all you've got! Where is the bada-boom?!"
―Wonder-Pink, after destroying the Notoriyeah

"We've been waiting for you, Ms. Mariana Kretzulesco, CENTINELS Special Combat Agent from the Transylvania Field Office. Or should I say...Wonder Pink!"
―Wonder-Red, introduction

"Time to rip you and hit the showers!"
―Wonder-Pink, taunt

Wonder-Pink is one of the main heroes in The Wonderful 101, and a member of the CENTINELS Planetary Secret Service. She's the fourth member of the Wonderful Ones, and the first female main playable character to appear in the game. Her real name is Mariana Kretzulesco, and she is an Olympic gymnast outside of being a superhero. Wonder-Pink's Unite Morph is the Whip. She can use her whip to both damage foes, and pull heavy armor off, weakening their defense.

Wonder-Pink's civilian appearance, Marianna Kretzulesco, is a skinny, fair-skinned girl with matching pink eyes, eyelashes, and pink hair that extends to her knees, with a bang sweeping to the left of her face and lipstick. She has a light azure scarf wrapped around her head, matching her shirt and the accent on her vest. Marianna carries gray-colored bangles on her wrist, but one of them have two on her right, and an earring on her left earlobe, taking the form of a teddy bear. She sports short, thigh-length jean shorts, black heels and brown, furry legwarmers. Marianna has a pair of shades with dark gold lens.

As Wonder-Pink, her hair is dyed into a slightly dark version of pink with purple streaks, tied into a long, flowing ponytail with her bang sweeping to the right side of her face, and her lips are noticeably more narrower. She wears a pink, female-version of the CENTINELS Suit with a matching jacket, a Shirogane Drive, embedded on her chest, and black, heeled-boots. A "male gaze" is Pink's black brief panties, and her eyelashes are visible when wearing her mask. Her Beautiful Whip is a pink whip with a large heart on top. She also retains her shades on top of her head

Wonder-Pink is the most athletic of the Wonderful 100, and is frequently known for her fashion sense. before she prepares to proceed the mission,she spends time doing her make-up, much to the team's dismay and impatience. Although she is the symbol of anger in the Wonderful 100, Pink has a motherly/big sister personality trait for small children, especially Luka. She also seems to like men like Vorkken.

Chosen to go to the Olympics in gymnastics while still in high school, Wonder-Pink is by far the most agile of any Wonderful One. She matches this with an advanced proficiency in melee weaponry, specifically with her Beautiful Whip, knit from a next-gen stay-press alloy “Belmont alloy,” for which she is unrivalled.

Pink is known for her “laissez-faire” personality, behaving carefree and sunny during even the most severe missions, as if her duties were just another after school club; however, it is that relaxed attitude that, more often than not, spells disaster for the team. Exceedingly sensitive towards trends, she has decorated her issued weapon with a variety of accessories, and her tendency to prioritize fashion over the mission can occasionally give her superiors headaches. Nevertheless, Pink’s excellent physical aptitude and peerless acrobatics have led the team to countless victories.

Extremely emotional, she sometimes reveals her terrifying true colors when angered. Pink is especially sensitive to anything said by Green, and she will gladly turn her tormentor into her whipping boy when set off.

Though she appears to detest children at first glance, Pink displays an unexpected caring side of her personality towards Luka, after circumstances force them together. This change in personality gives credence to the rumors that she is in search of her younger brother, said to be kidnapped by aliens.

For Wonder-Pink, fashion always comes before the mission. Extra care is spent to make sure each eyelash can be seen even through her Wonder-Mask. When she can focus on saving the Earth, it goes without saying that the cutest boys deserve saving first. An acrobatic ace, Pink’s weapon is the Beautiful Whip. Her thorn-studded Unite Whip proves her nickname as the Queen of Rage.

Wonder-Pink and Wonder-Green form a fun little duo in the Wonderful 100. Pink is constantly brandishing her whip at each of Green’s ill-placed comments. Pink has more faces than just the Queen of Rage, though. There’s a soft spot in her heart for children, and on more than one occasion she naturally assumes the big sister role. She is also smitten with Prince Vorkken (or "Vorkkie" as she insists on calling him), and tends to start fawning over him even in situations where it would be inappropriate to do so.

Drawing an "S" shape will activate Wonder-Pink's Unite Morph, Unite Whip, a pink spiked whip with a heart-shaped claw on the end, whose size varies depending on the number of available heroes.Unite Whip has offensive, and helpful abilities.

Range is where Unite Whip shines. It's not the fastest Unite Morph, but its destructive power makes it a force to be reckoned with. Unite Whip has the ability to make enemies dizzy. Also, Unite Whip is able to grab enemies and throw them. Making the Unite Whip big enough, you can throw virtually any enemy. It's also possible to reflect enemy attacks with timing, and it specializes in dealing with spiked enemies by ripping of their spiked plating, otherwise the spines would cause all other Unite Morphs to break apart on contact.

Unite Whip can also serve as a rope to swing across large gaps by latching the claw-shaped tip onto hooks, however, if the gap is a little wider, you'll need to increase the size of your whip, as shown in Operation 007-A.

The very early concepts of the Wonderful Ones 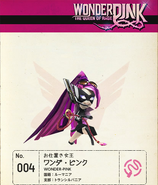 Pink, angered by one of Green's comments

Wonder-Pink's profile from the Membership Files

One of Wonder-Pink's QTE failures

Add a photo to this gallery

Retrieved from "https://the-wonderful-101.fandom.com/wiki/Wonder-Pink?oldid=7806"
Community content is available under CC-BY-SA unless otherwise noted.