Parents (most definitely a mother)

"Chin up, chest out, hands behind your back, teeth clenched!"
―Wonder-Green, to Wonder-Blue

Wonder-Green is one of the main heroes in The Wonderful 101. His real name is Jean-Sébastien Renault. He attacks with a gun, which he affectionately calls, "Christine Daae."

Jean takes the form of an overweighted boy with forest green eyes. He has lime green hair that combed in a pointy hairstyle on the back, while his bang sweeps into his forehead. Jean's garments consists of a light-blue polo shirt with four black buttons and a red bow tie. Overneath his polo shirt is his green short overalls that has black straps. Jean wears socks and brown shoes finally. His accessory is a brown-colored messenger's bag, full of candy items, such as a red-swirled lollipop, a candy cane, and some colorful Tootsie Rolls.

As Wonder-Green, he dons his Wonder Mask, and takes a lime-green theme color. Green's bowtie is identical to the one in his civilian form, but with a white shirt underneath his CENTINELS suit jacket. Green's CENTINELS suit consists of lime-colored pants, shirt, and a pair of plain black boots. His Wonder Pendant is attached on the center as a Wonderful 100 trademark.

Wonder-Green is the "cheesiest", most cheerful, yet the most gullible of the main CENTINELS team. Though he is a middle school student, he is incredibly cunning of mastering firearms, like his signature Christine Daaé. Green is the "joking expert" of the team, who enjoys teasing Blue and flirting with Pink, causing them to create rude replies. Green's favorites hobbies are playing video games, reading comic books, and eating junk food; despite of his physical appearance as chubby, he can run quickly to catch up the other members of the Wonderful 100.

Chosen to be a Wonderful One due to his incredible skill with firearms and other ranged weapons, Wonder-Green is currently a mere middle school student. Yet, despite his youth, it is said that he can shoot through the hole of a doughnut a 100 kilometers away, while eating a doughnut himself.

Possibly due to his privileged upbringing, he often seems to feel like the world revolves around him and is prone to ignoring the reality of his surroundings. He is also shamelessly rude, which he expresses through snide remarks aimed at Blue and clumsy attempts at flirting with Pink; Blue often replies with an equally rude comeback, and Pink will reply with thinly veiled threats of violence.

Even during the tensest of missions, he possesses a completely carefree nature; that is until something goes south, then he instantly breaks into panic. Far clumsier than most would ever suspect for a Wonderful One, the care with which Green uses his rapid-fire proton gun is another, more careful, side of him that holds great pride in his position.

He has developed a close friendship with Black, as both are similar in age and love video games, comics, cartoons, and general mischief-making. This mischief-making extends to his love of junk food, a forbidden fruit under his parents, but a near constant indulgence as Green partakes in missions far beyond their strict reach.

Despite still being in middle school, Wonder-Green is such a proficient sniper that he quickly drew the attention of the CENTINELS. Normally, he pretends to be a serious student while under his parents’ strict supervision, but when given free rein, he spoils himself at every opportunity. Even after transforming, he is reluctant to let go of his bag of junk food and its seemingly inexhaustible supply. His skills as a marksman have earned him the nickname “Le Sniper Supérieur.”

No matter how proficient he might be though, Wonder-Green is still only a middle school student. He stands out for his overbearing remarks, but he’s also been known to panic or to downright break down and cry on occasion. His superhero outfit does nothing to mask his emotions.

Drawing an upside down "L" shape will activate Wonder-Green's United Morph, Unite Gun. A small "L" symbol drawn with a few heroes in reserve results in a pistol, while a large symbol drawn with many heroes results in a weapon resembling the Super Scope accessory for the Super Nintendo Entertainment System (SNES). Each shot of Wonder-Green's gun requires one hero to be launched as ammunition.

No other Unite Morph matches Unite Gun’s range. Unite Gun can be used on the ground or in the air. Although it doesn't do a lot of damage, however Unite Gun can perform breif rapid-fire attacks by spinning the Unite Gun around, it actually provides a convenient set-up for Climb Attacks, since the Unite Gun uses other team members as ammunition.

You can also use the muzzle of the Unite Gun to pick up various objects, such as trash cans, cars, bombs, and enemies, which can then be fired back at other enemies. Large objects require a larger Unite Gun, which requires a large amount of teammates to make.

The very early concepts of the Wonderful Ones 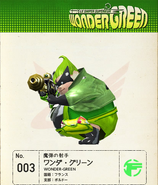 Wonder-Green's profile from the Membership Files

One of Green's talk sprites, the one with his shocked expression
Add a photo to this gallery

Retrieved from "https://the-wonderful-101.fandom.com/wiki/Wonder-Green?oldid=7801"
Community content is available under CC-BY-SA unless otherwise noted.