"You might not care about your bro the way most people do, bro, but think of it this way: We're giving you a chance to make it up to him... in hell!"
―Wonder-Blue, Telling off Walltha during his death

Wonder-Blue is one of the main heroes in The Wonderful 101, and a member of the CENTINELS Planetary Secret Service. His real name is Eliot Hooker (エリオト•フッカー, Erioto Fukkaa?), and he is an LAPD Detective outside of being a Superhero. He attacks with his Valiantium Blade.

Drawing a straight line will activate Wonder-Blue's Unite Morph, Unite Sword, a blue sword whose size varies depending on the number of available heroes. This Unite Attack boasts a wide attack range. It is also one of the four only Unite Morphs to have an easy shape to draw, the other three are Unite Hand, Unite Gun and Unite Whip.

Unite Sword also has defensive and helpful purposes. It can reflect enemy lasers, which allows you to bounce back beams shot from places the blade cannot reach. The blade possesses a lightning element, so it allows its carrier to suffer electric shocks without damage. Once struck, it's possible for it to gain a lightning-elemental attack.

The Unite Sword also serves as a universal key for any lock you might run into. It also activates a variety of contraptions, and can open new paths. The Unite Sword's range depends on how long you draw a straight line, as well as the number of teammates you have on stand by, the longer the blade, the longer the range.

A Wonderful One whose cover occupation is as a detective for the Los Angeles Police Department. Though young, he has gained experience and success in a variety of missions: taking down warring mafia families, counter-terrorism, and even taking part in military operations.

Having a strong sense of identity and a stronger dislike for authority, Blue is not the easiest Wonderful One to deal with in the organization; however, his ability to act quickly and make decisions in the blink of an eye has led to a chain of successful missions. Yet despite these successes, his hotheaded personality makes Blue prone to losing himself in anger, peppering his record with a significant number of failures.

Blue insists on making a scene for everyone to see, so in combat he acts arrogant, taunting the enemy, and is prone to posturing into different poses that might look “cool.” Unfortunately, reactions to his antics are conspicuous in their absence.

Poor at teamwork and preferring to work alone, Blue does not actively seek meaningful relationships with others. Instead, he accepts only those who are able to prove their skills, but this acceptance leads to a deep respect. He can even be paranoid to the extent of alienating potential allies. Ever since Blue's older brother was betrayed by his partner (who was in fact Vijounne in disguise), he has dedicated himself to exacting revenge on her, even if doing so puts himself and his teammates at risk.

His weapon, the Valiantium Blade, is said to become sharper with every slice, forged with a special alloy able to cut through anything in the galaxy. His Unite Sword can deal lethal blows to even battleships.

As a young boy, he lost his beloved older brother to a nefarious GEATHJERK plot, leading him to despise the alien invaders with a deep-seated passion. His hatred and desire for revenge is especially strong against the GEATHJERK operative known as Vijounne.

As a detective, and as a Wonderful One, Wonder-Blue has faced many challenges, resulting in an almost unhealthy amount of self-confidence. This goes some way toward explaining why he is not too eager to embrace newbie Wonder-Red as the new leader. Because of his pride, Wonder-Blue never misses an opportunity to make himself look cool, but he’s either too incompetent or just plain unlucky, because he always ends up making a fool of himself and becoming the laughing stock of the group.

Regardless of his constant banter, his skills as a swordsman are second to none. This has earned him the nickname of “The Supersonic Blade”. It goes without saying that this name is derived from his Valiantium Blade, which he puts to devastating use in his Unite Sword attacks.

Serving himself as a cool and quirky figure, Wonder-Blue is shown to be hot-headed, reckless, and absolutely ignorant, mainly the opposite of Wonder-Red. Blue is the most troublesome of the team, but is quick enough to lead the team in success.

Blue shockingly saw his brother betrayed and murdered by his partner (Vijounne in disguise), and releases his anger as the team encounters Vijounne, making him freely fight solo without Red's instructions. It's not until he learns of Red's past that he starts to understand the need for teamwork and starts to respect Red for also suffering a personal loss as significant as his own.

In his civilian form as Eliot Hooker, he takes the form of a 26-year-old man with extremely light blue hair that is tied into a ponytail. His bangs are swept to the left side of his face; one of them is streaked with a dark hue of indigo. There are 2 "W"s on each side of his head in his hair. He dons a light blue shirt, black pants, and shoes.

As of Wonder-Blue, he sports a blue CENTINELS suit, along with a slightly light shaded periwnkle-colored jacket abover. He silmpy wears black shoes but with white accents and laces and the two edges folded. Like every Wonderful One, Blue wears a standard Wonder Mask, and a Shirogane Drive, embedded on his torso. His Valiantium Blade, carries his signature color on its center and trademark and dark gold accents around with a red, sphere-shaped item on the bottom of the hilt.

Very early concepts of the Wonderful Ones

He is a master of the art of Zandatsu.

Blue upon being turned into a dog by Vijounne.

Blue after being burnt up by a laser.

Wonder-Blue's profile from the Membership Files

Artwork of the early version of Wonder-Blue with his dog version.

Wonder-Blue in his civilian form just before equipping his CENTINEL-Suit. 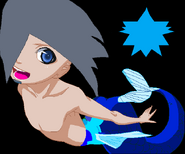 As a Werewolf
Add a photo to this gallery
Retrieved from "https://the-wonderful-101.fandom.com/wiki/Wonder-Blue?oldid=7501"
Community content is available under CC-BY-SA unless otherwise noted.