"(incoherent mumbling) . . ."
―Wonder-Black, on pretty much everything

Wonder-Black is a member of the Wonderful Ones, and the CENTINELS Planetary Secret Service. His real name is Krishna Ramanujan. He is a University Student outside of being a superhero.

In his civilian form, Black takes the appearance of a young boy with dreads, whose eyes are always covered by a Black ball cap. Black's garments consist of a a sleeveless black shirt, a black backpack, a white shirt tied around his waist, a pair of black jeans and red sneakers. Black also has a few accessories, including a pair of white and orange headphones, two silver rings and 2 armbands, one of his right wrist and one on his left shoulder.

Wonder Black has a black-scheming CENTINELS suit, matching everything he wears. In this appearance, Black has his cap backwards, revealing his whole face, but his eyes by a Wonder-Mask. He also have a Shirogane Drive embedded on his torso. The Time Bomb is inside of Wonder-Black's yellow-colored portable device.

The most silent of the main seven. Although he first appears boring and frequently plays his portable DS-like game device, Wonder-Black is unbelievably the most intelligent, as his IQ is 300, of course. He also seems to respond to tense situations in a somewhat emotionless and apathetic manner, though it seems he is chums with Wonder Green, as we can see them friendly wagering on how many GEATHJERK ships each one of them can take down at the very start of Opertion 009-A. We can also assume that Black also has a crush on Wonder Pink as Green goes on to explain rather suprisingly that the winner of the bet gets to do something either to of with Pink, this is further explained when Green says something about Pink's "darkest sadistic tendencies".

This personality trait is very unusual of Wonder Black due to his apathetic and silent disposition, this may lead us to believe that Black is partially mute and may not know how to socialise or interact with people, which is odd considering his supposed comeradary with Wonder Green.

An 11-year-old super genius with an IQ of over 300. While an active Wonderful One based at the New Delhi field office, Wonder-Black is also enrolled in a technical university in the United States, where he devotes himself to mechanical engineering research. He has enjoyed playing with machines ever since he can remember, parlaying this interest into numerous contributions to advanced science and technology. His accolades in field combat are equally impressive, as Black is especially gifted in solving cyber-crime.

Never showing much emotion, during missions Black is usually absorbed in his video games, never saying a word; however, inside his head, he is constantly thinking and preparing for what lies ahead. Nearly the same age as Green, the two have a close relationship, and will often lose themselves in ridiculous conversations, even in the middle of battle (although this can be hard to tell as Black rarely raises his voice louder than a whisper). After all, for all of Wonder-Black’s adult achievements, he is still a child.

His weapon, a personal invention he coined the Time Bomb, has the ability to slow down the flow of time in its direct blast radius.

Wonder-Black totes his handheld gaming system around with him anywhere he goes, whether he’s on or off-mission.  Possessing an IQ of 300, he spends a lot of his time helping out Professor Shirogane in the CENTINELS Science Research Center.

To the papers, he’s the 8-bit enchanter, but his talents go far beyond the lo-fi realm. Along with data collecting for the team, he can find his way around most anything mechanical and make it work for him.

While players may not be able to throw Unite Bomb over long distances, the blast radius is enormous and although it doesn't exactly damage enemies, it does however significantly slow them down for easier targeting, this feature is also useful outside of combat, such as when there are certain obstacles in certain levels are too fast to be traversed through normally, Unite Bomb can also open certain boxes. Naturally, Unite Bomb's blast range is dependent on its size, the bigger the bomb, the bigger the the blast.

While Unite Bomb's speed is on par with Unite Whip's, it doesn't exactly deal any damage to enemies whatsoever, instead enhancing the damage enemies take in the radius. This combines well with the slow-down enabling unusual combos that would otherwise be difficult or totally impossible to execute in real-time.

The very early concepts of the Wonderful Ones. 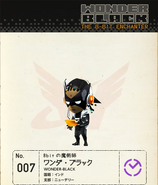 Wonder-Black's profile from the Membership Files

Add a photo to this gallery

Retrieved from "https://the-wonderful-101.fandom.com/wiki/Wonder-Black?oldid=7794"
Community content is available under CC-BY-SA unless otherwise noted.